All the Jewelery & Handbags are delivered with Certificate

This biography is taken from the website dedicated to Line Vautrin. We invite you to visit the website to discover her work of art.

Line Vautrin was born just before the First World War. She created her first bronze objects before she reached the age of 21. Things were difficult to begin with. She had a fiercely independent nature and refused to submit her inspiration to the whims of a boss – even if he was a great couturier. She remained faithful to this desire for freedom all her life. 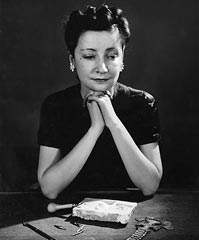 Line Vautrin, aged 25, posing in front of a plaster mould in the course of its elaboration.

Line Vautrin made her name thanks to the Universal Exhibition in 1937, where she hired a booth. Her collection became more diverse: as well as her famous bronze buttons, she exhibited necklaces, bracelets, ear-rings, belt buckles and bag clips, not forgetting a host of fashion accessories that are no longer used: comb-holders, slippers, foot-warmers, buskins, fourragères, forage caps…

And it worked! The following year, at the age of 28, she opened her first boutique near the Champs-Elysées and continued to create bronze objects. Depending on her inclinations and creativity, she added enamel beads, felt, feathers or fur to her bronze creations.

In the early 1940s, she broadened her range to include bronze boxes – compacts, ashtrays, pill boxes – which earned her fame. During the same period, she married Jacques-Armand Bonnaud, a multi-talented artist who had graduated from the Beaux Arts in Paris. He was a decorator and watercolour artists - with a definite interest in drama and poetry - and possessed grace and elegance.

They set up home in Le Marais area of Paris, in a private mansion which they completely renovated. Fitted and furnished by young artists at the time, who have since gained a handsome reputation, the Hotel de Serilly formed a magnificent backdrop for presenting the collections dreamt up by the bubbling imagination of their combined talents. They each had their own working space, alongside the workshops where fifty or so workers, both male and female, toiled to produce the elegant accessories that were so highly prized in a time of shortage.

Jacques-Armand used his talent to the full to afford Line more exposure. Thanks to him, number 106 in the Rue Vieille du Temple became a fashionable venue. Collections, galas, exhibitions, manufacture… there was always something new happening. The magazine press of the time showed an interest in Line Vautrin and her creations were enthusiastically received. Their shape and their weight were reminiscent of Merovingian adornments, but Line Vautrin, who liked shaking up codes, added lighter motifs to them. 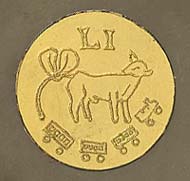 Line Vautrin made a rebus with her name [LI nœud veau train]. Later on she used it as a metal stamp.

Her facetious and playful humour can be seen in the rebuses throughout her work: Line and Jacques-Armand made a game of cutting out poems and proverbs from history, combining them with signs and symbols to squeeze them onto a paperweight or a box lid. Their separation near the end of the 1950s marked a turning point in Line Vautrin’s evolution.

She tackled a new substance: cellulose acetate, which she made into a new material christened "Talosel". She shaped, carved and heated it to make decorative articles which allowed her to optimise the use of the material: lamp bases, screens and above all mirrors. Sorcière mirrors, convex mirrors, distorting mirrors with finely chiselled frames just waiting to tell a tale… Line Vautrin’s work is always accompanied by a mischievous and poetic touch.

The boutique she opened on the Left Bank attracted a new clientele, but Line was more a creator than a manager and the next stage of her life led her to become the head of a school where she passed on some of the creative techniques she had developed. Her daughter, Marie-Laure Bonnaud-Vautrin, taught there for ten years, whilst developing her own particular style. Her students were ladies eager to fill in their spare time, who rubbed shoulders with craftsmen in search of new techniques. 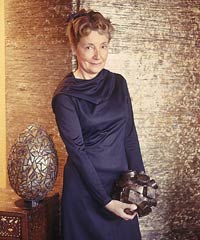 1973. Line Vautrin poses in front of a Lumaline folding screen. She is holding a Talosel sculpture with metal inlays. On her right, a Talosel egg inlayed with mirrors.

In the early 1980s, Line Vautrin decided to close the school and retired to a small apartment where she continued to create objects that she occasionally sold. Was that the end of Line Vautrin? The chance meeting, a few years later, with a collector from London, David Gill, set her back on track. David Gill was instrumental in bringing about the re-discovery of Line Vautrin. He organised exhibitions all over the world, which led the indefatigable creator to travel extensively, something she had never allowed herself.

In 1992, she was awarded the National Arts and Crafts Prize for her research in decorative techniques. She died in April 1997, two years before the exhibition devoted to her work at the Museum of Decorative Arts in Paris.

Her constant search for femininity, refinement, sensuality and subtlety, combined with her love of words and her humour, were constants throughout her life. She was a creator who never had a master, an artist who did not follow fashions and she belonged to no particular school. She is truly original, unique.

Fabulous design of Robert Goossens, made of silver plated metal. The model has been originally made for Madame Grès, famous french couture house, in the 60s. This model is also published in the book of Ginger Moro - European Designer Jewelry.

Are you looking for jewels, bags or design objects from the Dior Brand?  Contact us, we provide a personal shopper service and expertise.